All these picspams are coming out of order, I know, but apparently the Barbies decided they wanted to reenact "Cool" next. Can't really blame them, either. A couple previews, then the jump! 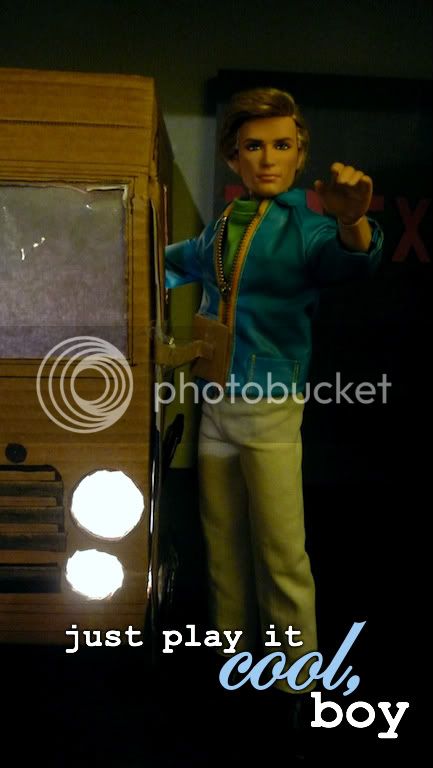 For some reason the shot is reversed from what actually happens in the movie, but since it's a promo photo (and my Velma!Barbie's arms bend the other way anyway) I decided to use this shot for reference. Heh.

YouTube video of the premieres of West Side Story in 1961.

These are a few of my favorite things ( Collapse )

It's rainin' red, the use of red in West Side Story
( Collapse )

The trouble with Tony. ( Collapse )

Fifty years ago today, West Side Story opened in theaters and became an instant global sensation. Adapted from Arthur Laurents and Jerome Robbins’ 1957 Broadway musical — a modern, urban twist of Shakespeare’s Romeo & Juliet — the film entranced audiences with its acrobatic choreography, finger-snapping songs, and heartbreaking tragedy. To commemorate the occasion, LIFE.com is currently showcasing a look back at the iconic film and a gallery of never-before-seen photos of Natalie Wood, who won the role of the innocent Puerto Rican girl in love with her brother’s sworn enemy only after Audrey Hepburn declined due to her pregnancy.

By the time 23-year-old Wood landed the role of Maria, she was already an established Hollywood veteran, a former child star (Miracle on 34th Street) who’d made the leap to more mature roles (Rebel Without a Cause). Though she wasn’t nominated for an Oscar for her role in West Side Story — her singing was dubbed by Marni Nixon and she instead received a Best Actress nod for the same year’s Splendor in the Grass, opposite Warren Beatty — the musical won 10 Academy Awards, including Best Picture. (Wood lost to Sophia Loren, who took home the trophy for Two Women.)


Wood had an allure — her Hollywood romances are nearly as renowned as her movies — that matched her extraordinary talent. Before she turned 25, she had collected three Academy Award nominations. But it’s West Side Story that most movie fans think of when they look back on her tragically abbreviated career: her white dress at the dance when she first meets Tony, her girlish delight in “feeling pretty,” and her ultimate fury at the childish men who cost her true love. And those eyes — her mesmerizing, doe-like eyes. Shakespeare could have written about them.
.

'West Side Story' Film Still Pretty, And Witty, At 50

Listen to the Story

Talk of the Nation

Fifty years ago, the film version of the acclaimed Broadway musical West Side Story premiered in theaters across the country. Like the original production, the film set Shakespeare's Romeo and Juliet against the backdrop of 1950s New York, and for many the story holds up just as well today as it did five decades ago.

Two of the film's stars — Rita Moreno, who played Anita, and George Chakiris, who played Bernardo — join NPR's Neal Conan to talk about the film's enduring meaning. Theater critic Misha Berson, author of Something's Coming, Something Good: West Side Story and the American Imagination, also joins the conversation to discuss the musical's evolution and its lasting influence on musical theater and pop culture.
( Collapse )

So I'm about to watch the movie and do a "What West Side Story Means To Me"-style writeup afterwards, as well as visit all these amazing links (petzipellepingo, you're amazing), but in the meantime, 50th anniversary-fic!